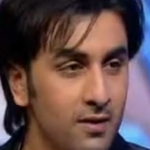 Born in Mumbai in 1982, Ranbir Kapoor started his acting career with the 2007 movie Saawariya, for which he won the Best Male Debut. He played the role of Ranbir Raj or “Saawariya” (aka “loved one”) in the romance/drama/musical. Kapoor was born into Bollywood, – both of his parents of whom were actors, and his grandfather a Bollywood filmmaker!

Here’s a fun piece of Bollywood Trivia: Kapoor is close friends with another Bollywood actor – Imran Khan, and as a result the two are often compared against each other! Another piece of trivia about Kapoor is that he was named the Sexiest Asian Man!

Learn about the actor through his own words! Here is an interview with actor Ranbir Kapoor – in it he answers the question “If you could date 5 women, who would you pick?” Two of his answers include Scarlet Johansson and actress Sharon Stone. Watch the interview below to find out his other answers!

Want even more info on this Bollywood star? Check him out on twitter and hear what hea has to say himself!

One thought on “Ranbir Kapoor”

John Abraham is undoubtedly known as one of the sexiest Bollywood actors in India! Born in 1972, this ex-model turned...